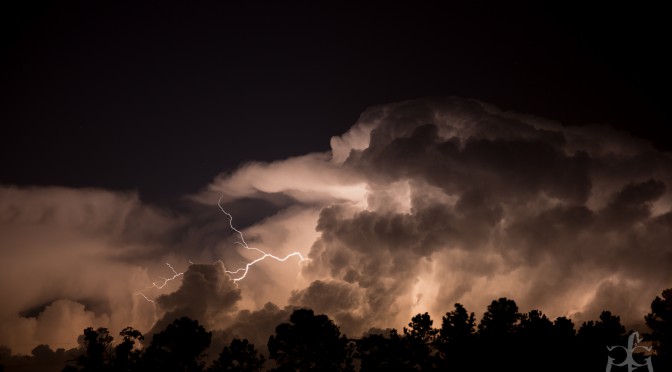 One of my most popular photographs is the one you see above. (High resolution at the end of the article)

I laughed, and walked out my front door. Absolutely clear skies.

“Um, what am I supposed to be seeing?”

I took two steps off the front sidewalk and looked to my left.

There, spread across the sky in the distance was a rolling thunderstorm. I could not hear it, but lightning was flashing through the clouds every few seconds.

I dashed inside and grabbed my camera bag and tripod before heading out the back door to set up. Despite appearances in the photo, the storm was quite distant. Below, you can get a much better perspective on what I was actually seeing.

My primary camera is a Canon 6D

, which is a wonderful multipurpose lens. For astrophotography, I tend to use either my Sigma 35mm f/1.4

, for wide angle shots with excellent light gathering and clarity. The Canon, however, has the zoom power and clarity needed to pull off a shot like the one I was trying to capture.

I started off with the tripod further toward the back of my yard, attempting to minimize the trees in the foreground limiting my view.

, I started experimenting with exposure settings and framing. I’d never tried to shoot a thunderstorm before, and I knew the learning curve was going to have to be steep if I wanted to get a good shot before the storm cleared.

When capturing lightning, timing is everything.

Too early? You get some light, but no actual lightning.

Hold your shutter open too long, and you get what looks like a double exposure, like this:

This is nature’s version of a strobe light viewed through long exposure. In both of these, I opened the shutter too early. I was using an 11 second exposure for the first, and a 23 second exposure for the second. What is happening is that in order to get the proper exposure of the clouds and sky (note the dim stars in the background) at f/4 and ISO 200, I had to try to judge when to open the shutter to catch one flash of lighting… and only one. In the time between the opening and closing of the shutter, the clouds have moved. If a second bolt of lightning sneaks through, you get a glimpse of the same cloud in two places at once, hence the double-exposure effect.

Long exposures can also catch you by surprise. I watched an airliner heading in the direction of the storm (from my perspective, anyway), and pulled the shutter when it felt right. (Click to see the detail)

Thankfully the plane seemed to travel on to its destination unharmed, but the photo seemed to suggest it was in for a bad time. Side note: aircraft anti-collision lights can make some interesting patterns across the sky if you’ve got the patience and a good spot to shoot from.

After a bit, I realized I could get just enough of an improved angle by moving the tripod onto a table on my patio. With the tripod fully extended, and me standing on the ground (trying not to jerk the camera while pushing the trigger on the remote), I started figuring out how to get the shot I wanted.

Watching the patterns of the storm, I saw a pattern in the lightning, that it would produce a solid bolt every 7-12 seconds. My exposures were about 10 seconds long. If I could split the difference, and shoot back to back, I stood a good chance of isolating a single bolt as it left the cloud and split the sky.

In the end, it was a shot about halfway through 300 or so exposures that ended up being the keeper. Sometimes that happens. You look at the tiny preview screen on the back of the camera and go “That’s the one.” But you keep shooting anyways, just in case there’s something better.