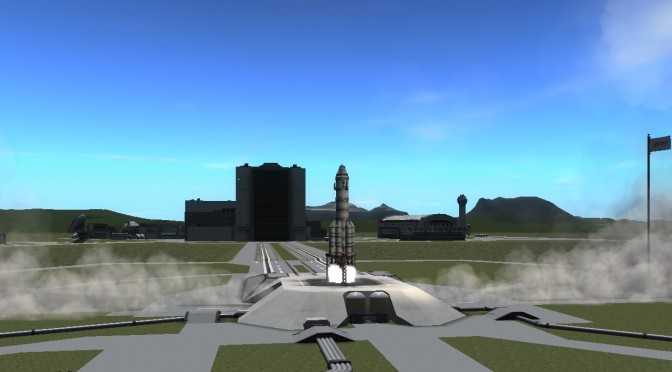 (Mods which have AVC version checking support are marked with a +)

The Firespitter plugin can be updated from the official page, the KSP forum thread hasn’t been updated with the new version info. (Currently 7.1.2)

I’ve written a post on the topic, including the DDS loader plugin. (1.0 now includes DDS loading natively, so a plugin is no longer necessary.)

I’m currently using the OpenGL mode, and it has been working great for me. (NVIDIA GPU).

If ATM isn’t working for you, try the workarounds listed below:

If using an NVIDIA GPU, or one with good OpenGL drivers, try adding “-force-opengl” to the launch command line.
If using a modern DX11-capable GPU, try “-force-d3d11-no-singlethreaded” (no quotes for either option).

AMD:
Check out this post to get OpenGL up and working.

Using OpenGL with the following mods shown as working, memory utilization at the VAB was 2.6 GB (otherwise it was 3+/crashing) on 0.9. Interestingly, I am trying DX11 on 1.0, and using over 3GB of RAM without crashing. Update: Eventually ended up crashing on DX11, but 1.0.x seems much better at handling memory than .90 for one reason or another. I’m back on OpenGL now, and all is golden.

Some enterprising souls take it upon themselves to fix bugs until Squad’s next official release. Here are some particularly handy ones I’m trying out currently.

Active Texture Management: 3.8: This mod is crucial to using some of the more resource-intensive mods (meaning large textures, in this case). This plugin works behind the scenes to compress the high quality textures created by the mod devs into something more suitable for real-time game engine use. (Compression and scale options are configurable. Note: The first run of ATM will take a LONG time to load. After that, it will be much faster! [NOT TESTED]  See note above about OpenGL

AVC: 1.1.5: Automatic Version Checking for KSP. For the mods that support it, this is a great plugin for keeping up to date on the latest versions of your favorite mods. [WORKING+]

Chatterer: 0.9.1: Actual functionality added to the game: zero. Amount of ambiance? Significant. This mod inserts Kerbalized dialogue and communication sound effects to the game. It even ties in with RemoteTech. [WORKING+]

Contracts Window+: 5.0: The existing mod window is a bit of a nightmare. CW+ allows you to get a much better view of what you’re working on and filter out the unnecessary data. [WORKING+]

Kerbal Engineer Redux: 1.0.16.6: Really handy mod for surfacing all the hidden details that you need for planning and executing your launches. Especially useful in the VAB/Hangar. (Be sure to middle-click on things) [WORKING+]

Kerbal Joint Reinforcement: 3.1.3: Performs a number of adjustments to make joints stronger, as well as stabilize physics on load or when leaving warp.  [WORKING+]

Module Manager: 2.6.3: This is a single DLL that goes in the GameData folder root that is required for many other mods to function. It allows modders to non-destructively add attributes to stock or other developers’ spacecraft part files. [WORKING]

MonkeyWrench: 0.1.5: Disclaimer: This is the mod I’m working on. 🙂 Contains a number of tweaks using KAS and TweakScale, and modifies the utility of a number of other systems. Hit the releases link on the project home page to see the OmniRCS. [UPDATE COMING SOON+] (Waiting to see how a few other mods shake out before I update)

ScienceAlert: 1.8.7: Get notifications when an experiment is available for testing. [WORKING]

Science Funding: 1.1.1: Get financial rewards for returning science to Kerbin. (A good stopgap until reputation is tied into a monthly budget from the space agency) [WORKING+]

Ship Manifest: 4.3.0.2: Allows you to transfer resources around your ships. Can be set to respect adjacent living spaces and other realism options. [WORKING+]
Connected Living Space API [NOT TESTED]

StageRecovery: 1.5.6: Get back funds and resources from dropped stages. [WORKING+]

EditorExtensions: 2.8: A simple plugin that allows increased control over symmetry options in the editor, vertical snap, and more. This is a mod that I’ve realized I can’t do without for any sort of complicated build. The latest version adds a few new tools for alignment that are wonderful. [WORKING+]

Part Angle Display: 0.3.0.1: Highly useful. This should be stock. Control the angles of rotation. [WORKING+]

TweakScale: 2.1 Adjust the sizes of many parts. Resources and weights are scaled accordingly. [WORKING+]

Squad implemented a resource system for version 1.0, so it remains to be seen how that will affect some mods.

Regolith: 0.1.7: A more extensible resource system framework for other systems to build upon. Karbonite and K+ now use this as the base for their resource systems. Now in initial release. [DEPRECATED?+]

B9 Aerospace: 5.2.8: A large collection of parts ranging from aircraft to space opera-style giant ship components. [TO BE DETERMINED+]* I’m still looking into this one. Not all the plugins that the mod depends on have been updated recently. It is possible to get it somewhat working, but I can’t say that conclusively.

Extraplanetary Launch Pads (EPL): 5.1.2: Build rockets in space and on other celestial bodies. [UPDATE COMING SOON]
EPL Regolith conversion: 0.21: RoverDude has now included parts for EPL in his packs, I’ve not yet tested this to see what it adds over his work, but it has been updated for 0.90 [NOT TESTED]

Infernal Robotics: 0.21.1: A collection of mechanical parts that can be used to build out highly customized moving elements of your craft. [WORKING+]

KW Rocketry: 2.7: Part pack including a large number of fuel systems, engines, and structural parts. [WORKING, see note] There were a few issues detected past-release. One of the team is offline, but the community put together a placeholder patch, downloadable here: 🙂

Kerbal Inventory System: 1.1.4: From the creator of KAS, a new inventory system overhaul of KAS features. [WORKING]
Kerbal Attachment System: 0.5.1: Pick up things. Attach things to other things. Towing. Lots of goodness. Update: Now an extension on top of the KIS functionality. [WORKING]

Modular Fuel Tanks: 5.5.2: Change the payload of your LFO tanks to other resources. [WORKING]

Procedural Fairings: 3.14: Procedurally-built fairings to shield your fragile craft, available in nose and mid-body varieties, as well as stationary and detachable configurations. [WORKING]

B9 Procedural Parts (wings): 1.2.1: Fork of B9’s procedural wings project, after B9 declared that updates weren’t coming soon. [Reported to be somewhat working]

RealChute: 1.3.2.3: Adjustable, more-realistic parachutes for your craft in a variety of configurations. [WORKING+]

USI is a system of mods by BobPalmer/RoverDude which tie together nicely. He worked on the 1.0 release resource system using his previous work on ORS and Regolith as a basis for design and implementation.

Asteroid Recycling Technologies: 0.6.1: Turn those pesky asteroids into TO BE DETERMINED centers of production. [Not currently working+]

Freight Transport Technologies: 0.4.1: Need to move really large cargo around the star system? FTT will get you going with room to spare.  [WORKING+]

Distant Object Enhancement: 1.5.5: This is a wonderful mod for immersion. When in orbit, you now actually see the shine from other objects and planets in other orbits at a distance, and it is particularly visible when in time warp mode. Also applies other visual tweaks. Be sure to check it out. [WORKING]

Engine Lighting: 1.2: Something that has bothered me since the beginning of playing KSP was that night launches were dark. I stumbled upon this great mod, and it has made me happy. [WORKING]

PlanetShine: 0.2.3.1: New plugin that adds bounced lighting from planetary surfaces to your craft for a more realistic appearance. Be sure to check out the screenshots of this one. [WORKING+]

Scatterer: 0.014 Experimental: Adds atmospheric scattering effects, and makes for some gorgeous views. Be sure to check it out. [NOT TESTED]

Texture Replacer: 2.1.1: Replace stock textures and customize Kerbals. [NOT TESTED, updated for 1.0] (I am not currently using this mod, but a lot of people use it, so I will continue to track it for the time being.)

CrossFeedEnabler: 3.3: From NathanKell: “A partmodule: adds a fuel crossfeed between the part it’s added to, and the part this part is surface-attached to. Use it for radial tanks.” [WORKING] Thread not yet updated, get the latest release from github.

Memory Usage: 1.11: Monitor CPU and memory utilization by hitting Alt-F11. (Run the EXE in your KSP folder) [NOT TESTED]